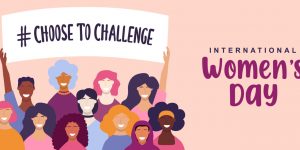 This year’s International Women’s Day is celebrated under the theme #ChooseToChallenge, a concept particularly fitting shipping industry, where only 5% of maritime leadership roles are occupied by women.

From challenge comes change and this is why #ChooseToChallenge was selected as the theme for International Women’s Day 2021, an annual reminder of the importance of gender equality, celebrated since 1911.

Women are a very small minority of the world’s over 1.6 million seafarers and reasons vary from maternity constraints to fear of harassment, problem of acceptance etc. As a disturbingly surprising example, from a total of 210,000 merchant mariners in the US, only 15,465 are female and of these, only 4,729 hold a credential endorsed as ‘Master’. Just 149 of them hold a credential endorsed as ‘Master Unlimited – Any Gross Tons’.

On the shore-based part, latest data by Spinnaker’s Maritime HR Association highlight that the proportion of male and female employees in the global shore-based workforce remained largely stable in 2020 – 56% male, 41% female, and 3% unknown. However, when it comes to seniority and specialisms, it is found that 95% of all admin roles are occupied by women, compared to just 5% of maritime executive leadership team roles.

In this context, the IMO’s recently announced SheEO leadership scheme, seeking to boost women with the leadership skills for maritime sector, constitutes last year’s highlight with respect to global action for more female leadership positions in the maritime sector. Let’s take a look at some more:

A timeline of initiatives

-March 2020: On the occasion of last year’s International Women’s Day, ‘Celebrity Edge’ set sail on its seven-day journey, with 27 women from 16 different countries onboard, becoming the first ever all-female bridge and hotel officer team cruise ship to set sail.

-May 2020: The US Coast Guard appointed Rear Adm. Melissa Bert to the post of judge advocate general and chief counsel, making her the first woman to hold the service’s top legal position.

-September 2020: The US Navy launched its Sexual Assault Prevention and Response (SAPR) program, in order to meet the needs of the victims within the maritime industry.

-September 2020: The Swedish #metoo movement launched Vågrätt, a project to portray women seafarers in a more realistic and positive light.

-November 2020: ICS launched its ICS Diversity Tracker, revealing that 30% of companies employ women in board-level roles, and close to 60% of companies have female officers on board their ships while just 7.5% of total seafarers were female.

-November 2020: On the occasion of the International Day for the Elimination of Violence against Women and Girls, ECSA and ETF launched an initiative supporting women in shipping with a focus on three priorities: An Awareness-raising campaign, measures to recruit and retain women in the industry, and gender policies in the workplace.

-November 2020: On the same day, ITF launched a 16-day campaign highlighting Gender-based violence, at work as well at home.

-November 2020: As part of its work to support gender diversity in the maritime sector, IMO announced the forthcoming launch, under its Women in Maritime programme, of the SheEO leadership scheme, which seeks to boost women “with leadership skills and confidence to take a seat at the shipping decision-making table”.

-January 2021: ECSA and ETF held first kick off meeting under their joint project, which aims to boost participation of women in European shipping, on 28 January.

As gender pay gap is defined the difference between the gross hourly earnings between working men and working women, a trend which seems to insist despite global efforts for more meaningful gender equity. According to official EU figures, women earned 14.1% less than men per hour in 2020, which means:

While female representation across the maritime industry seems to have remained stable in 2020 globally, there has been a slight increase in the size of the maritime gender pay gap in the UK, with a current gap of 43%, latest figures by Spinnaker’s Maritime HR Association revealed. In salary terms, this is equivalent to an average male salary of £67,000, compared to £38,500 for females. The same analysis for key locations revealed Denmark as having the lowest gender pay gap – at 30%.

On 8 Match, IMO is launching the online campaign #MyMaritimeMentor, inviting women and the global maritime community to participate by sharing a photo of their mentor and this card, using hashtag #MyMaritimeMentor on social media: Twitter, LinkedIn and Instagram. Participants can also use Facebook to share their photos, stories or tributes to their mentors.

This campaign will provide the opportunity for individuals to recognize the work of an inspiring mentor in the maritime industry. This reflects the 2021 UN-Women theme: “Women in leadership: Achieving an equal future in a COVID-19 world”.

The official launch of IMO’s women in leadership scheme is expected today, 8 March.

More generally, on the occasion of #IWD2021, groups around the world are invited to join the #ChooseToChallenge campaign, focusing on:

In 2019, the IMO Assembly adopted Resolution A.1147(31) on Preserving the legacy of the World Maritime theme for 2019 and Achieving a Barrier-Free Working Environment for Women in the Maritime Sector. This urges firm action to advance gender equality throughout the maritime sector and help create a work environment that promotes equality, diversity and reduces bias.